They even killed their friends and families. Junko's classmates, the 78th Class, sealed Hope's Peak Academy and lived peacefully inside it for a year without knowing that the Ultimate Despair members were already in their midst.

Junko incapacitated them somehow, executed the headmaster Jin Kirigiri, and erased her classmates' memories. She worked behind the scenes and controlled Monokuma in order to cause anxiety and paranoia between the students to make them kill each other.

She also began to broadcast everything as a TV program for the public to enjoy and fall into despair. All of the students then believed that Junko had died, not knowing that the Junko they knew was an impostor, because at the time the students were uninformed to the fact that there were actually sixteen students.

Junko continued to work in the shadows, while manipulating and motivating other students like Celestia Ludenberg and Mondo Owada to kill each other for her own entertainment.

After her classmate Chihiro Fujisaki, the Ultimate Programmer, is killed, a program called Alter Ego is found on a repaired laptop, hidden in a locker from the cameras hidden around the school.

Alter Ego is meant to emulate a person, and as such Alter Ego retains a very similar personality to their creator.

Alter Ego agrees to look into the mastermind behind the events, helping the remaining students as much as possible.

Alter Ego is destroyed by Monokuma after Sakura Ogami's suicide, as Monokuma lacked someone to execute but still wished to cause additional despair.

Alter Ego is believed to be completely destroyed, and the students mourn Sakura and Alter Ego's deaths. During the course of events, Junko was able to ensure the deaths of several of the students, before realizing that Kyoko Kirigiri had somehow managed to break into the headmaster's office and steal the master key and part of Mukuro's profiled information.

She then decided to break her own rules and stage a murder by using Mukuro's body. Junko almost succeeded in her attempt to kill Makoto and frame Kyoko, but it was ultimately fruitless when Kyoko saved Makoto just as she was about to stab him, and then by Makoto not calling out Kyoko's lie during the Class Trial when Kyoko announced that she would not have been able to access her own room.

Junko had no choice but to call guilt on Makoto throughout the trial. Junko's plans to execute Makoto were thwarted by Alter Ego, however, who had stopped the execution in time for Makoto to evade death.

She taunted the students, still, despite the setback, and proclaimed that even if Makoto survived the execution he would eventually rot inside the school garbage dump, making his punishment worse than usual.

However, Junko was properly thwarted when both Kyoko and Makoto showed up at the gymnasium to issue an ultimatum.

Makoto and Kyoko deduce that Junko was the one pulling the strings the entire time and she was revealed to be the mastermind behind everything at the Academy.

She then confirmed the suspicion that emerged from the intense Class Trial debates - that she erased everyone's memories of the last two years so she could implement her plan to make the world suffer in despair.

Though seemingly livid over the results shortly after the vote was settled, Junko instead became perversely delighted as she realized she would be able to experience the extreme despair of painful, unnecessary death.

She delightfully accepted her execution and death, but not before giving the remaining students the means to escape the Academy, as well as telling them that her death would make the school unlivable as it would cause the school's air purifier to turn off, allowing the polluted air from the destroyed outside world to come inside.

After most members of Ultimate Despair committed suicide, the surviving members hacked her body into pieces and attached those parts to themselves; one notable example was Nagito Komaeda, who took her left hand and treated it as his own, despite it being non-functional.

As a back-up plan, Junko had created an AI version of herself , with the knowledge she stole from Chihiro Fujisaki. It is even implied that her death was planned right from the start.

In the end, both robots are destroyed by Izuru Kamukura to salvage their hard-drives for their AI. Her motives behind doing both things was so that she could obtain comatose bodies and also to lure the Future Foundation into the game.

Once Hajime Hinata and the rest of the survivors reached the final trial and the choice to either graduate or live on the island forever, Junko pretended to be Makoto and force them to graduate.

After the survivors realize they are being tricked, Junko reveals herself in the form of a giant body and communicates with them through the use of a giant cell phone which displays her.

As the trial carries on, Makoto, Kyoko, and Byakuya Togami appear in the game and Junko's full plans are revealed to the cast.

Junko planned to upload her own AI into the comatose bodies which would effectively revive her in their bodies and to also keep the members of the Future Foundation locked in the game forever as she is the one that must allow a student to graduate.

Junko's overall goal in the end was to fill the entire world with copies of herself that she dubs "Junkoland". Junko spreads her despair into the survivors and manipulates them into wanting to graduate but with the help of Chiaki Nanami, Hajime is able to become awakened and put an end to her despair.

With this the eight are able to activate the Forced Shutdown, which put an end to the AI Junko for good. In the sixth trial of the Killing School Semester, after the exposure of the mastermind Tsumugi Shirogane , she cosplays as Junko and pretends to be "Junko Enoshima the 53th", claiming that even though Junko died in the Killing School Life, Despair cannot truly be killed.

When the other students question her on who she really is, she changes into a cosplay of Hajime Hinata, a participant of the Killing School Trip, and states "I'm me.

Nobody else. She then asks Shuichi what his realization means, and he realizes it must mean that Hope's Peak Academy is actually fictional, which she confirms, also stating that the Future Foundation and the Remnants of Despair aren't real either, as all of those events took place in a franchise of video games and anime called Danganronpa , and The Killing School Semester is merely the 53th season of a reality TV series based on it developed by Team Danganronpa, the participants' memories, personalities, talents and past having been fabricated with the use of the Flashback Lights in order to create an exciting story.

However, it is ultimately left ambiguous if the events surrounding Hope's Peak really are fictional or not, as Tsumugi stated that her plan for The Killing School Semester was a copy of someone else's, and Shuichi points out in the epilogue that she may have been at least partially lying about his and the other students' backstories.

Categories :. Mature pages are recommended for those who are 18 years of age and older. To me, despair isn't a goal or a cause or a way of life or an instinct It's what defines me as Junko Enoshima!

So this is how the despair of death feels Ahhh, it's so wonderful! Even a tenth of this despair Even a hundredth!

I want every last soul on this planet to taste such despair! I want the entire world to die with that despair in it's mouth! Okay, let's do this!

I've reserved an extra special punishment for last! Let's give it everything we've got! Hope is harmony. A just heart, moving toward the light.

That is all. Despair is hope's polar opposite. It is messy and confusing. It swallows up love, hatred, and everything else. Because not knowing where you will end up is despair.

Despair is even what you cannot predict. We accept donations year round, so if you haven't donated yet, there's still time to add your support!

Hope's Peak Academy is known to produce exemplary Ultimate graduates for the past one century. Talent is what they treasure the most.

And Makoto Naegi also happens to be one of their treasures. An ordinary boy with an ordinary life or so he thinks gets the glorious opportunity to be a student of the Academy.

With his hopes up, he starts attending the school with a good will. Only if he knew what darkness is looming for him ahead. The school he had come to admire, will he still be glad about attending it after knowing the agonizing truth?

Every time he dies, he wake up in a classroom, at the start of the killing game. You might think he might save everyone or fall into despair.

No, none of those. He just grows tired. Tired of the same things happening. Naegi Makoto finds himself in a strange room filled with security footage.

Makoto gets chased all over the place during the Tanabata festival night by one extremely dangerous and explosive Junko Enoshima. Can't he just have a normal and non-life threatening high school experience, for once?

Well, the answer was that he was in a world of trouble. Why are you doing this to me?! If this sounded like a practiced movement, that was because it was.

Makoto had been dodging explosions and running away from the Ultimate Despair sisters for the past half-hour: well, mostly Junko, because if Mukuro were chasing him, she already would have caught him, what with her military training and reflexes.

What IF Junko didn't give Makoto enough time to argue for hope during the final trial? What IF someone's despair sent Makoto to endure a second execution?

What IF Makoto's bad luck allowed him to survive a second execution? What IF Junko concluded that the only way to punish Makoto without killing him was to just Mukuro Ikusaba has decided to leave her sister behind and walk her own path.

Her entire life she has been in search for despair, yet she found nothing but boredom and blandness. Despite her decision, she is still tormented by the regret of leaving her little sister behind, not once, but twice.

Can she really find a future for herself when the whole world hates her? 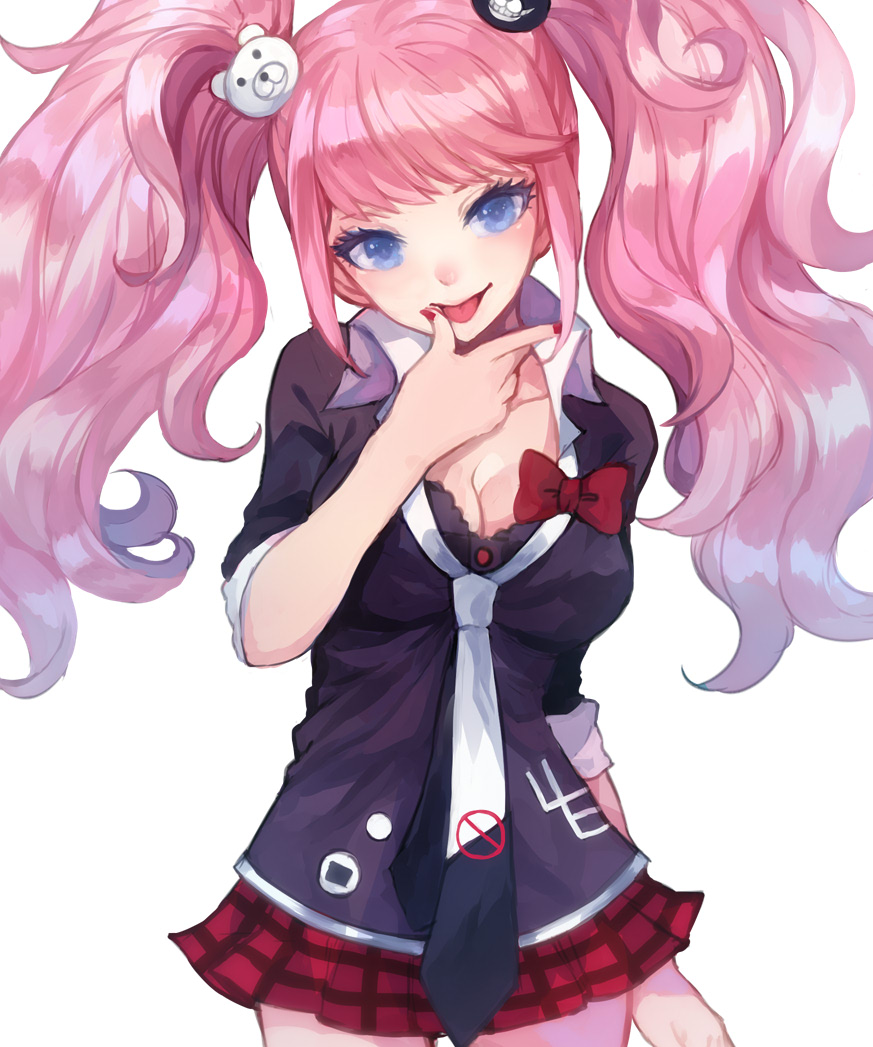